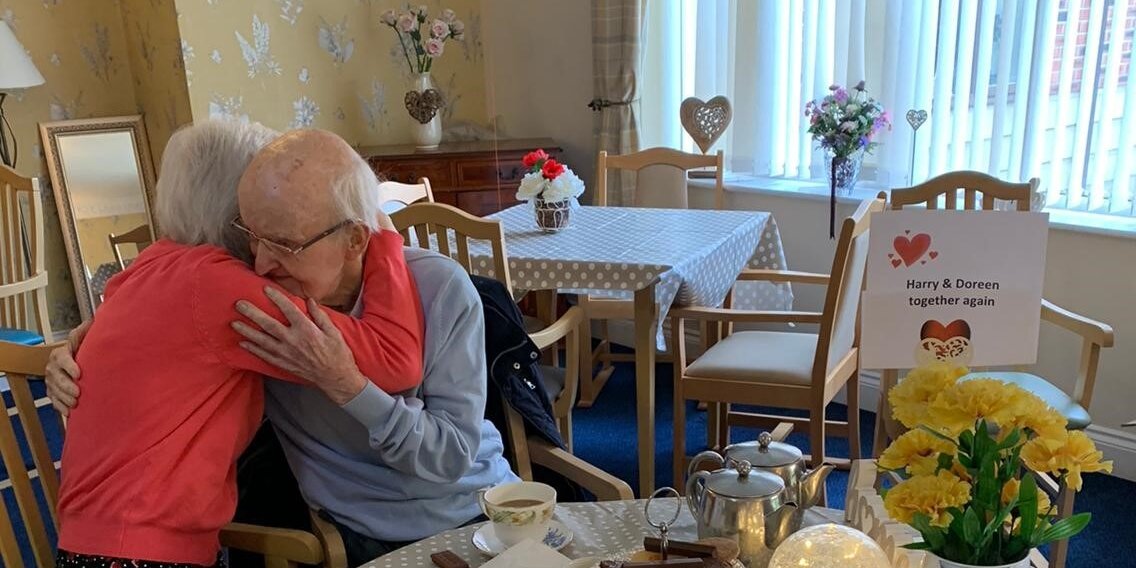 The Care Team at The Grange Care Home in Darlington have been working hard, and today managed to reunite resident Doreen with Harry, her husband of sixty-seven years.

Harry moved into the care home to avoid another day without his wife.

Both were still living at home, but Doreen was too frail to care for him after Harry fell, and about two months ago, Harry caught COVID. The family had already made the decision to move their family into The Grange, but obviously, these are uncertain times, and no one could be sure they would see each other again.

Unfortunately, due to COVID-19, Harry was unable to move in until he received the all-clear from the hospital.

Harry is the last survivor of eight siblings. He met sixteen-year-old Doreen at the local youth club, shortly after returning from Greece, where he had completed his National Service.

They married in 1953 and have now been married sixty-seven years. They have two daughters, Christine and Ann, and one granddaughter, Laura.

Doreen trained as a Nursery Nurse and completed her career, working at community special school, Mayfair School in Darlington.

Harry was a popular figure in the Darlington area. He held various jobs, which included working for the Royal Mail as a Postman, although the job he loved and talked about most, was working as a fireman in the age of steam railways. He used to tell his daughters about the time the train he was working on got stuck in the snow, in the middle of nowhere!

They are enormously proud of their family and particularly their granddaughter, Laura, who is a qualified nurse and who has worked throughout the pandemic, in ITU, caring for COVID patients. Laura is now training to be a midwife.

Harry and Doreen’s family are thrilled to see them reunited

Granddaughter, Laura said; “They really are loves young dream- your care means everything! Thank you from us all.”

Ann, their youngest daughter commented; “Everyone at The Grange has been so supportive, our parents are where they should be; safer together.”

They are now reunited, much to the happiness of both and the hard work of the care team to keep the two of them together. The family have been involved throughout, determined to keep the sixty-seven years married couple together.

The video, shared by Burlington Care Ltd., has already had thousands of shares, and enquiries from across the world, to run the story on news channels.